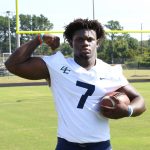 Brandon Wilson, star Defensive End and Tight End for the Dolphins, has been named to the South roster for the 2019 Touchstone Energy Cooperatives Bowl to be played Dec. 14 in Myrtle Beach.

Wilson has been a disruptive force for a Battery Creek defense that has dominated during the Dolphins’ current three-game winning streak. He is second on the team in tackles (33) and leads the team in sacks (7), tackles for loss (5), and fumble recoveries (2). Including 1 for a 65yd TD.

Wilson is the proud son of Walter and Helena Wilson. He grew up in a sports loving home with his brother Will Wilson playing sports year round. Off the field, he is an honor roll student and is involved in the Beta Club, National Honors Society, FCA, and numerous community service activities. He has won the Jefferson Book Award as well as All-Region Awards in Football, Basketball, and Track. He will be attending Georgia Southern University on a full athletic scholarship majoring in Computer Engineering.