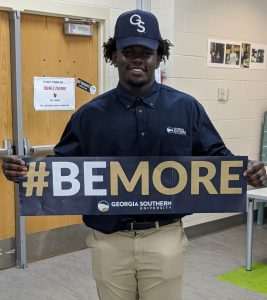 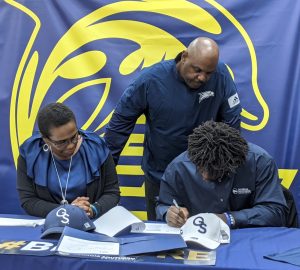 Today, Brandon Wilson signed his National Letter of Intent to play football at Georgia Southern University. He was surrounded by his family, friends, coaches, and teachers as they celebrated his move to the next stage in his academic and athletic career.

It was a time of laughter and emotion as Coach/Dad Walter Wilson said, “I am harder on you than anyone else, but I’m proud of you son!” Brandon also spoke thanking everyone for their support and wanting to play at Battery Creek with his Dad as his coach.

As captain of a Battery Creek High School football team, Brandon was an anchor of the staunch Creek Defense at Defensive End.  Graduating early, he will begin his college football career in January when he will move into his dorm in Statesboro and begin attending classes.

Congratulations to Brandon Wilson for your achievements and we look forward to what you have in store in the future!